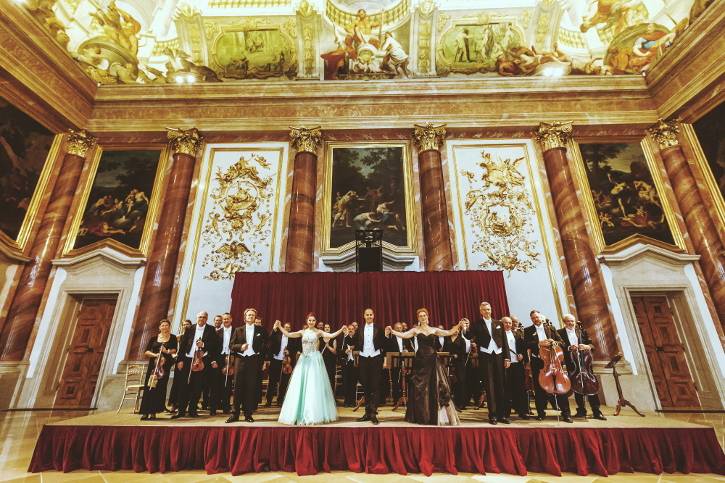 The Vienna Hofburg Orchestra is a large classical orchestra that was founded in 1971. At that time, the well-known Austrian musician and conductor Gert Hofbauer brought together the best musicians from all major orchestral groups in Vienna.

To create programs of high artistic standard and to oblige an orchestra with at least 30 – 40 first-class musicians and depending on the season 3-5 well-known singers of the State and Volksoper Vienna.

(from an interview on: www.music.at )

To present to the audience a glimpse of the musical wealth of this city.

Who exactly was Gert Hofbauer? He was born in 1937 in Knittelfeld in Styria. 20 years later he studied trumpet first in Graz (1958) and then Vienna (1960). In 1962 he arrived in Salzburg, where he received his first engagements from the Salzburg Mozarteum Orchestra and 2 years later in 1964 he was engaged by the Tonkünstler Orchestra Lower Austria. He played the first trumpet, which testifies to his talent. In 1969 he gave in to the charm of conducting and attended the concert class as well as the conducting class of Richard Oesterreicher.

Already two years later (to keep to the rhythm), he got the idea of ​​the Hofburg Orchestra. According to his own words, he was moved by the then already large but unsaturated demand for classical concerts in Vienna. So he founded and conducted for many years and made the Vienna Hofburg Orchestra one of Vienna’s best orchestras today.

The orchestra had its first concerts in the Vienna Konzerthaus, later it was moved to the Musikverein. Between 1988 and 2003, the preferred venues were the halls of the Vienna Hofburg, such as the huge Festsaal or the impressive Redoutensaal.

In 2019 the orchestra had a very successful premiere at the Vienna State Opera. Therefore, they will play four more concerts in the famous Opera House in July and August 2020.

Under the direction of Gert Hofbauer, the Vienna Hofburg Orchestra has already gained considerable reputation through domestic and foreign radio and television productions as well as recordings. International engagements in symphonic concerts brought additional fame.

Already under Gert Hofbauer the tradition of the New Year’s Eve Concert and New Year’s Concerts was introduced, at that time the only other orchestra to do that were the Vienna Philharmonics. But this has also led to short-term problems, because according to this article in “The Press” of 2009 it was reported that the Vienna Philharmonic sued the Vienna Hoffburg Orchestra, since they had the term “New Year’s Concert” registered as a word mark since 2008 (to see here)

The last official statement in the article from Dec 2009 was the following :

[…]Hofbauer was “exceptionally” allowed to use existing print works (ie flyers or posters) for 1 January 2010, but only in a “comprehensive omission statement” for the future and a commitment not to challenge the word mark “New Year’s Concert”. But Hofbauer did exactly that and applied for the cancellation of the trademark through his lawyer.

The end of the song

Unfortunately, there is no follow-up article in the press. But an employee who had witnessed this story at the Hofburg Orchestra could still remember parts of it. Namely, they found out in the archives an old printing unit with which they could prove that they too had been organizing New Year’s concerts for thirty years. Therefore, this was not a new imitation. The comments on this newspaper article indicate that the readers were anything but enthusiastic about this action.

Whether due to the long existing tradition or the lack of distinctive character of the word mark or otherwise, it has certainly ended well for the Hofburg orchestra. They are still playing their New Year’s Concert, currently in the Liechtenstein Garden Palace. There are many more New Year´s Concerts of various orchestras all over Austria. And let’s be honest, there is no likelihood of confusion here. 😊

The best way to form your own opinion is to visit one of the New Year’s Concerts of the Vienna Hofburg Orchestra. Tickets are available at Viennatickets.com

The Hofburg Orchestra in the Present

In 2014 Sylvia Moser took over the Vienna Hofburg Orchester, her ostensible goal is the most authentic interpretation of Viennese classical music.

She has followed in big footsteps – that of the great Gert Hofbauer. But as a child of two state opera singers, and former opera singer herself, as well as co-founder and director of the Vienna Residence Orchestra, she knows how to fill it 👣

Together with her children, who of course also enjoyed classical music education, she manages the symphonic concerts in an outstanding manner. More about Sylvia Moser here in our article about the Vienna Residence Orchestra or here the link to her biography.

About the performance under Sylvia Moser

The Vienna Hofburg Orchestra performs with about 40 outstanding musicians Viennese waltz and operetta sounds. These include, of course, famous pieces by Strauss and Mozart, but they also interpret Franz and Emmerich Kalman. Additionally a pair of classical ballet performs, sometimes with dancers, who already had engagements in the State Opera. For some pieces, the Vienna Hofburg Orchestra accompanies opera singers. Partly solo, sometimes sung in duet. Grand artists of our time such as Sera Gösch, Ella Tyran, Andrea van der Smissen, Peter Edelmann, Franz Supper, Eugene Amesmann, Georg Lehner and others enchant with their powerful and beautiful voices.

If you click on the names, you will find the biographies of the individual artists. For pictures please click here to the website of the Vienna Hofburg Orchestra.

90 minutes of classical music will be performed in the most beautiful concert halls in Vienna – without a break. The main venue of the Vienna Hofburg Orchestra has always been the imposing Redoutensaal in the Hofburg Vienna. However due to current renovations at the Vienna Parliament, this hall is now exclusively used by the Austrian Parliament who moved into the Redoutensaal of the Hofburg for the duration of the renovations. The Hofburg Orchestra was forced to move and now performs in the Mozartsaal of the Konzerthaus Wien or in the majestic Festsaal, as well as in the Zeremonien Saal (ceremonial hall ) of the Hofburg Vienna. Every now and then in the Musikverein Wien.

Eevery year they perform 2 Christmas Concerts in the large Festsaal of the Hofburg Vienna for up to more than 1000 guests. On individual days and on New Year’s Eve and New Year’s Day, they open the doors to the magical ambience of the Liechtenstein Garden Palace, with an increased cast (approx. 50 musicians) and 4 opera singers

The Musical Direction of the Vienna Hofburg Orchestra

Sylvia Moser has given the musical direction to Giuseppe Montesano in 2017.

Who is Giuseppe Montesano?

We already introduced Giuseppe Montesano in our article on the Vienna Residence Orchestra but to get more into detail, his biography describes him as follows:

The Turin-born musician studied piano and composition at the Conservatoire of his hometown, and as a scholarship holder of the association “Associazione per la Musica De Sono” he has been trained as an orchestral conductor in the class of Professor Georg Mark at the Conservatory of Private University Vienna and graduated from the Conservatorio di Milano with honors by Maestro Vittorio Parisi. In the 2015/2016 season, Giuseppe Montesano assisted Philippe Jordan with the Wiener Symphoniker and was the musical director of the production of the Johann Strauss Operetta Wien, in the seasons 2013-15 also assistant to Walter Kobera at the Neue Oper Wien. He has been musical director of the Vienna Residence Orchestra and (thus) of the Vienna Hofburg Orchestra since September 2017. In September 2011 he won the first prize in the 5th International Conducting Competition in Graz and in May 2016, he was awarded the first prize in the International Competition awarded for opera conductors in Constanta.

Montesano and the Hofburg Orchestra

As I said, he has – just like at the Vienna Residence Orchestra (link) – the musical direction. he is responsible for the musical quality of the orchestra. These include decisions regarding the program, the cast or orchestra size, etc. Some of these decisions he makes in coordination with the experienced Sylvia Moser.

Under his musical direction, the Vienna Hofburg Orchestra features renowned conductors such as Vinicius Kattah, Prof. Robert Lehrbaumer, Svetoslav Borisov and Gerhard Lagrange. And he too likes to lead the musicians harmoniously through the operatic and waltz tunes. The conductors also know how to entertain their audience.

A detailed overview of all these great artists who make the Vienna Hofburg Orchestra what it is – namely one of the best of its kind – can be found here on the homepage of the orchestra.

Personal Experience of the Author

I myself was fortunate enough to experience my first classical concert with the Vienna Hofburg Orchestra. And I must confess, before that I thought classical music would be something for people with their own library at home, relaxing in the evening with a glass of red wine while listening to symphonies and quoting Nietzsche.

Therefore, my first visit was rather restrained, namely on the New Year’s concert – the day after New Year’s Eve. Some may well imagine that it will be hard to leave your living room on the 1st of January, but I promised it to my companion. Nevertheless after entering the Garden Palace Liechtenstein, then further into the impressive Herkulessaal I was left astonished. And when, a little later, this overwhelming live music of almost 50 musicians and the magnificent voices of the opera singers had an effect on me, the New Year’s Eve – or rather its consequences – was quickly forgotten. Even a bit of Viennese fun was incorporated, just like it is tradition. And the Radetzky march conjured up a nostalgic smile on my face, because I knew it from my childhood. I experienced all the power and beauty of this music that evening.

And meanwhile, I even do some morning yoga exercises to random classical music. Not always. I’m not a professional listener, but I do know some of the pieces already by whom or from which symphony they are. That makes me happy and also a bit proud, because classical music meets us everywhere and over and over again. And this New Year’s concert was my first, not my last one. Meanwhile, I’ve been to a lot more and I am not finished yet.. 💛🎻

Tickets for the concerts of the Vienna Hofburg Orchestra – one of the best in Vienna – can be booked in two different categories, simply, safely and quickly on Viennatickets.com 😉